March 3rd, Chiang Khong, Thailand – The bus ride from Luang Prabang to Luang Nam Tha was both a little painful and extremely beautiful. Doing the trip in daylight requires a change of bus in Udomxai and the pain derives from riding in a minibus stuffed with people. Unlike in other places, where riders would be left to stand, here they put plastic or wooden chairs along the aisle making sure every available space is used. This was particularly true on the second bus, which was also along the most unpaved portion of road leading to the temporary chairs bouncing all over the place. The beauty, however, dominated the entire journey. Most of the trip the road winds its way through the forested hills of northern Laos providing magnificent vistas; the only scars along the way are where the villagers utilize slash and burn agricultural techniques tearing away pieces of the forest. The bus passes through many tribal villages along the road and as you get north of Udomxai they feature fewer and fewer satellite dishes and electrical wires. As we approached Luang Nam Tha the setting sun was reflecting in the wet rice paddies matching the idealized image I have of how Southeast Asia should be (or once was). Of all the places we have traveled through so far, Laos comes the closest to matching that idealized image.

Luang Nam Tha itself is a medium sized town that seems to big for its population. It is waiting for its moment when they finish paving the road north to the Chinese border and west to the Thai border making the town a key stop on what would be one of Asia’s most important trade routes. Of course when, and even whether, the job will be completed is anyone’s guess. The road from the town to the Thai border (the last leg of our trip through Laos) is the worst stretch here. There are many construction trucks working on something, but if it is sealing the road I couldn’t tell. The trucks are mostly kicking up the dirt from the road making this one of the dustiest journey we have embarked upon and leaving us colored in a reddish brown. Without any sealed patch for the 195 kilometer stretch I would say the construction pace is a bit slower than say a ‘big dig’ (Boston) or ‘mixing bowl’ (DC) pace (sorry only frame of reference I have) and completion by the target of 2005 is quite unlikely. For now, there are few vehicles around town and it is a peaceful place to bike between villages. While we were leaving from a guesthouse south of the town where we were obtaining trekking information a man asked us if we spoke French. I replied no so he continued in English, ‘my English not so good, follow me to my party.’ In many places this would be viewed as quite suspicious, but this area has a feel of honesty to it and we followed him.

At first we tried biking really slowly as he walked, but that did not work so well and we walked our bikes with him to a house on the other side of the main road. He told us to leave our bikes in a neighbor’s lot and follow him. The yard was covered by a large tarp and as a typical ‘hire for any occasion’ band played music with cheesy jokes between songs (I assume it was cheesy because the band leader was the only one laughing) dozens of people sat at tables eating and talking. A legion of mostly woman (most of whom seemed to be relatives) walked between tables with bottles of Lao Lao (rice whisky) and a glass offering up shots to everyone. The great party trick was to direct them to drink before you, as etiquette dictates they accept, thus leading to quite a bit of drinking on their part; somehow though it does not diminish from the drinking on everyone else’s part. This was followed by dancing, which we were urged to participate in. We easily picked up the subtleties of the Lao hora as we slowly moved in two concentric circles with some little hand motions and the occasional circle crossing. It turns out this was an anniversary party, well more precisely an anniversary of death party. Apparently, for the first three anniversaries (yertzeit if you will) after someone dies the relatives throw huge parties with the final one being the biggest. A small house is built and some of the person’s belongings are placed in it, it’s decorated with various offerings and donated to the temple following the party. This family has been preparing for three days killing two cows and a pig for what must have been an expensive celebration. The deceased was the father of the man who led us here and I suppose he just wanted us to share in his joy. He did not ask for anything in exchange other than that we take pictures and send him some; maybe we were just hired as photographers.

Word of our dancing acumen must have spread quickly across town because the next morning our trekking guide was already aware of our earlier escapades. We, along with two Germans, spent a few days trekking across the forested hills between tribal villages and after several meals with these people my unscientific conclusion is that, after rice of course, most of their calories come from bamboo and rattan; I have a hard time getting excited about eating boiled furniture. Our first night was spent in a joint Tai Dam (Black Tai) – Tai Daeng (Red Tai) village and the second night in an Akha village. When we arrived at the Tai village the children were in school studying mathematics; dutifully repeating after the teacher when instructed. After school the younger kids played marbles while the older kids put up the net for a game of Kataw (a cross between soccer and volleyball). We wandered around watching the girls weaving on their looms, one is located under every stilted house, and got a peak at their collection of silk worms. There was no attempt to sell us their textiles until a designated time in the morning before we left. By contrast, when we arrived at the Akha village some kids were down by the river fishing and, after we gave them candy and they did not say khawp jai (thank you), they ran up the hill to give warning that we were on our way. There were no children in school (we did see two the next morning but no teacher) and we were rushed by girls with bracelets to sell us. Wandering around here brought requests for money in exchange for photographs or handicrafts. In the evening after dinner we each had three little girls crawling on us for what is supposedly the traditional Akha massage offered to guests after journeying up the hill to the village. However, this one was followed by the three girls backing us each against the wall and taking fistfuls of their bracelets out in another attempt at a sale. Both villages should receive a similar number of tourists, so I do not know why they have developed such different postures towards their visitors.

The trekking itself was enjoyable as most of it was through forested areas, some within the Nam Ha protected area. The forest here, like on the drive up, is only scarred by the patches of slash and burn agriculture and a few areas that have been logged. Within the protected area the government seems to be doing a good job at keeping loggers out and a villager who did clear forest for rice paddies was fined a substantial amount and kicked off the land. In related news, the park where we had our first Borneo jungle adventure (if you do not remember you can read about it here) has found itself in the press. A Washington Post article (link here) focuses on the futile attempts at orangutan conservation in the forest as loggers operate freely; to the frustration of the rangers but not seemingly the government. Someone surveying the area for the conservation efforts spent a week there and found no signs of orangutan. Similarly, a traveler who recently went into the same part of the park we did (according to the registration book the first to do so since we were there in early December) reports that the area has been cleared to help villagers collect the durian that falls from the tall trees. There are no longer any signs around of orangutan or much other wildlife; this just highlights how fragile these areas we visit are and how quickly they can be destroyed when governments operate under indifference or ignorance (any country who happens to be the world’s biggest polluter but is not part of the recently implemented Kyoto Protocol’s environmental policy spring to mind?). 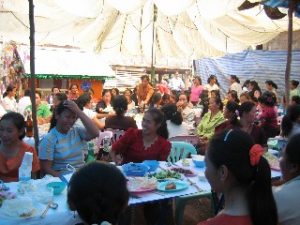 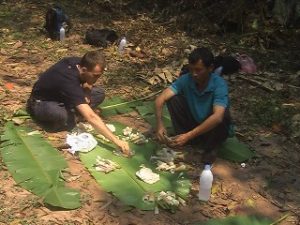 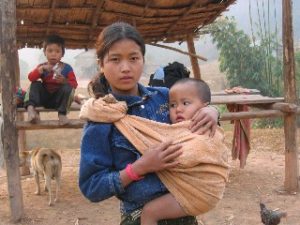