February 25th, Luang Prabang, Laos – After an uneventful night train and a relatively simple border crossing we found ourselves in Laos. The first clue that this country is different is seen when hiring a taxi from the border to Vientiane; the price is clearly marked and there is no attempt to charge you more. With a population only around 150,000 Vientiane is a great small city that probably felt like a small town not that long ago. This country is the current darling of the professional aid community and the influx of western money through direct aid, expats administering programs and increasing tourism is evident. Even with that, the city has not yet become a tourist-dominated place nor have the citizens become as jaded as you find elsewhere. The jumbo drivers have not yet learned to follow you for blocks honking to get your attention (as if after saying no 5 blocks ago you suddenly do want a ride) nor do they charge more than the standard rate. The streets are not yet lined with shops selling the same crappy, cheap souvenirs; there are a few stores and more opening up but it’s not near what you find in Ho Chi Minh City or Hanoi. There are some interesting temples around town with the particularly impressive Pha That Luang serving as the crowning glory of Lao sovereignty. The French legacy has left some serious scars on all of Indochina and Laos in particular, but it has also provided Laotians with a healthy taste for French wine and cheeses creating a great selection to appease western taste buds. We particularly enjoyed biking around the outer limits of the town and popping into random temples, occasionally stumbling on people going through there standard prayer rituals. Of course the best way to relax away the afternoon is found at Wat Sok Pa Luang a few kilometers from the town center. There, for $4, we had use of their herbal sauna before our Lao massage, after which we could enjoy our newfound tranquil state sipping tea on the veranda in the forested landscape. With the number of westerners and corrupt government ministers living the high life it was a relief to learn that you can still rent a large villa with private garden for $350 a month; of course that includes the maid/cook and guard/gardener.

Heading north to Luang Prabang took us 11 hours, about 3 hours longer than it should have. I know this because the bus that left an hour and half later than us arrived an hour and a half before we did; the only explanation being that we had the only driver in Southeast Asia who prefers the brake to the gas pedal, and the locals were still vomiting. Luang Prabang is quite a contrast to Vientiane; it is a small town that probably felt like a small village not that long ago. Unlike Vientiane, the growth here feels unnatural, driven solely for the sake of the tourist industry. The former capital of the Lao kingdom has a population of about 16,000 with over 30 temples still standing which include some truly beautiful examples of architecture and art. It’s reputation for temples and charming atmosphere has attracted many tourists and, as commonly happens, the tourists have attracted cheap (but overpriced) souvenir markets, rows of travel agencies, guesthouses and lousy ‘backpacker’ cafes, jumbo and boat drivers who think hassling is the best way to get a fare and many more tourists. One great example of the difference between here and Vientiane is our experience shopping. In Vientiane we found a wonderful antique store which had all sorts of good finds mixed in with the junk, the owner was completely upfront about which was which. She has a collection of opium pipes that include the standard Chinese versions and mass produced Vietnamese copies you find everywhere as well as four authentic Lao pipes that are very difficult to find. She told us about the different types, their ages and value; she was selling the Vietnamese ones for $4, the Chinese for $40 and the Lao for more. In Luang Prabang every souvenir shop has the same Chinese and Vietnamese pipes and the typical price is around $200. (Of course we have not seen another Lao pipe anywhere, so it is a good thing we bought one of the 4 remaining at the shop in Vientiane.) The atmosphere in Luang Prabang is not yet as Disneyesque as Hoi An, but that is the direction it is heading in if the city does not come up with some way to control the distorting effect of tourism.

The question of how to preserve, or even if you should preserve, the great cultural relics like Hoi An, Luang Prabang, Bhutan, Cuzco etc. is a very interesting one. I have not decided to what degree these cultural sites are analogous to environmental ones. Clearly there is some similarity in that we want to conserve both but while environmental sites can be set aside as reserves, can you really do the same thing with cultural sites that consist of other human beings? I cannot begrudge the local population for trying to make a dollar on the tourists who come through and I find it hard to say they must freeze how they live so we can observe, study and appreciate their heritage. At the same time, there must be some system for balancing their need for money and development and the general desire to conserve their heritage; maybe Bhutan’s method of charging a high amount for entry and restricting numbers can work for cultural sites as it does for environmental (like Manu reserve in Peru) or historical (like Nefatari’s tomb in Luxor) ones. For the time being, beyond the tourist strip, you can still find that small village atmosphere and after most of the tourists have headed to the cafes for the evening you can still watch the monks chant. We were lucky enough to be here during an interesting procession (someone said it was the 2500th anniversary of one of Buddha’s speeches but that makes little sense as the 2500th anniversary of his death was 50 years ago; I think it was the February full moon festival) that consisted of townsfolk circling the temple with candles and flowers and then placing them around a stupa, all to the peaceful chanting of the monks. Of course a bit later, as if to provide the perfect allegory to what is happening here, you could hear the cheers erupt from a nearby bar as an English premier league team (I think it was Chelsea) scored a goal, muting out the beating of the large drums from the temple atop Phu Si hill. 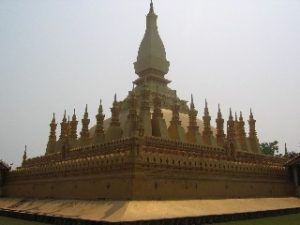 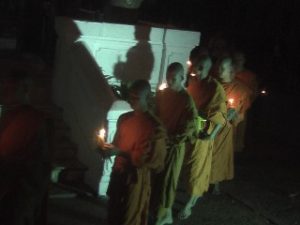 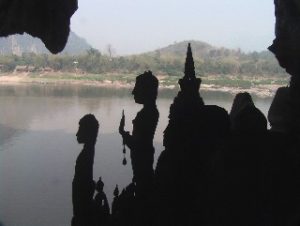