December 24th, Sandakan, Malaysia – Booking a day before we wanted to go meant our only choice for accommodations at Mt. Kinabalu Park was the hostel. Staying in dorm rooms contains a major negative and a major positive attribute; on the downside is the lack of privacy and increased noise which makes sleep difficult but at the same time you have the opportunity to meet your fellow travelers and even occasionally the stranded local family of 8 sharing a single bunk bed. It was particularly helpful on this night because we met three other like-minded backpackers (a British couple and an American) who would serve as our hiking partners for the two day trek. With the range of tourists who come to Sabah’s most popular attraction we were lucky to end up with three other people who were both interesting and fun to accompany us on the trail. We were all long-term travelers with stories to swap, anecdotes to share and advice on each other’s future destinations to provide; with plenty of time for all that as we traveled up and down the mountain.

The mountain itself, at 4095 meters the highest peak between the Himalayas and New Guinea, is regarded as one of the easiest 4000 meter summits to climb. Superficially this may be true; the trail is readily accessible, requires no technical climbing, is well maintained with regular drinking water and has comfortable rest houses for an overnight stay. In fact people of all ages regularly attempt and complete the trek to the summit. However, the altitude gain has to be contended with coming from sea level in Kota Kinabalu and the trail, though not overly difficult, does ascend 2400 meters in just 8.7 kilometers with much of that in small, steep bursts of tall steps; draining on your muscles climbing up and destructive on the way down. While we had no intention of starting the first day’s 4 hour hike early, the noise from the local Outward Bound group and elite ROTC kids from Singapore meant sleep was over and there was little reason not to head off and try to beat the predictable afternoon showers. Despite others attempts at early starts, once we had picked up our mandatory guide, left our big packs in storage and had a little breakfast all five of us ended up on the same shuttle to the trailhead. The day starts off so hopeful; the trail misleadingly begins heading downhill (the only half kilometer of downhill on the day) towards a little waterfall. We all hike at a decent pace through changing landscapes up the mountain; for the most part sticking together as we pass the large groups that took their early starts and the slower people. The six kilometers and 2500 steps of the ascent to the nights lodging passes decently fast as we carry on conversations; with new people to speak with there are plenty of discussions to have as we cover our shared interests and various travel experiences. Towards the end of the hike every turn brings anticipation of seeing the rest house before us, but the feeling now is nothing compared to what lies ahead as our muscles are still relatively fresh and we do not yet really feel the difficulties of the altitude change. We are among the first to arrive, allowing us to settle into our rooms and take the first hot showers with plenty of time to relax before an early dinner and bed, preparing for our 3am departure. Later arrivals continue showing up throughout the afternoon and early evening with each subsequent group noticeably wetter than the preceding as they finish in the daily rains.

We had planned to get up at 2:30AM to prepare for our morning departure for the summit, so when an early knock came at the door it took us by surprise; the Brits’ guide was suggesting an earlier start as the rains had not yet stopped and the trail would be difficult. The notion of doing the ascent in the rain made us question if it was worth it and while I was certainly going Karen needed a little more convincing; luckily, our companions’ optimism helped push her over the edge and we were off. When we left the lodging a little after 3 the rain had stopped, and it would not start again until later in the afternoon when we were waiting for onward transport. Despite this, several guides had prematurely decided that the trail would be too dangerous for their hikers; both groups of energetic kids who had come 75% of the way up the mountain were kept from even trying the summit, seemed like a shame to me. Following a night at the high altitude, some people quickly started to feel its affect and the early going, which consisted of some steep stairs up to the tree line, was difficult while still close enough to entertain discussions of turning around. I was hopeful Karen would not make that choice and try to make the top; but either way I certainly was and knew that I had to keep my legs moving if I was going to make it. So I pushed ahead of Karen and our guide and headed up the mountain. The steeper nature of this morning’s 2.7 kilometers meant that our paces spread out; when we hit the first section of rope used to help people up some of the steeper limestone and I found myself behind a large group of slow single file people I decided I needed to pass them if I wanted to keep my pace. It was not until the trip down in daylight that I saw what I had actually climbed, but in the dark it didn’t look so difficult so I made my way up the limestone around the line of rope users. Once ahead of them I was basically all alone for the remainder of the hike; I would pass a few more hikers but for the most part there were a handful ahead of me, often out of sight, and a large line of twinkling lights behind me who were not getting any closer. The major downside to the solo walk was that I only had myself to keep up the motivation; on the plus side it gave me plenty of time to appreciate the mountain and the clearing, star-filled sky. When I passed the 7km marker I took a turn on to a rocky plateau and could see the checkpoint but no hikers ahead of or behind me; a glance up at the sky though revealed more stars than I had seen in quite sometime. I took my first and only extended rest of the ascent and laid down to watch the sky; I could make out the constellations of the northern hemisphere for the first time since Tahiti and saw many shooting stars travel across the sky. As I got up to continue my walk I saw a lone, early-rising, mountain tree shrew, a species endemic to the Kinabalu area of Borneo occurring only above 900 meters; if this little creature could make it I could too. It was not until after the checkpoint, where you turn up towards the high ridge from which several summits jut out, that the altitude began to take its toll with every step becoming more difficult and slower. I could see the occasional torch flicker ahead of me and could clearly make out the ridge and the summit destination; we had to make a turn towards the summit once reaching the ridge and I kept pushing myself by promising a rest once I made that turn for home. Of course the trail didn’t actually make that turn as it took a more diagonal route and it wasn’t long before I was staring at the final uphill scramble to the summit itself. With the red light of our American companion’s (David) headlamp as a beacon I pushed up the final rocks, alone in the dark night, pulling myself to the summit, struggling with every breath in the thin air. I was the fifth person to make the summit that morning taking about 2:30 hours; well short of the expected 3-4 and even quicker than the record 2:40 for the complete 17km trip up and down. The early arrival gave me plenty of time to appreciate the summit, the view across much of Sabah, the climb and the cold hour long wait for sunrise. As sunrise neared, more and more people reached the summit; but it was clear that many had turned back including the groups I had passed earlier. With every blue coat I was struggling to see if it was Karen making the top; and then with just a few minutes before the sunrise about an hour after I had arrived I could see her face under one of the emerging hoods.

The sunrise itself is anti-climactic; but the adrenaline of reaching the top easily carries you down towards the rest house. Spending most of the short trip in a brisk pace talking with David, I was ready for a quick breakfast and then the six kilometer descent to the trailhead. With the goal attained we spend more time on the way down appreciating the flora of the mountain; we stop to take pictures including a short side trip to photograph some large pitcher plants. The plants have large cups that can hold up to a liter of water which is used to attract insects. Unlike other plants, they are not attracting them for pollination rather they digest the insects for nutrients; these are insectivores plants, really cool. As the descent continued the muscles tightened and the steep steps really took their toll on the body (it will take many days before the soreness is gone with every step up or down a struggle). We start passing the people on their climb up each with that long look on their face which says they have a long day ahead of them before reaching their goal. One climber I passed made an observation we had made the day before; the climbers on the way up all have that blank look while those coming down all have a smile. With the end near we pick up our pace, catching and passing the group of kids who never even attempted the summit and left before we did; I take their group photo by the small waterfall. Then the cruelest moment of the trip comes when, after having climbed up 8.7 kilometers and down 8.2, that first downhill we began with becomes an uphill finish; that last ascent takes what is left out of us and it is time for a restful afternoon. At least that would be the ideal, but what was supposed to be an easy bus ride to Sandakan and a relaxing, early night turned into a long day as we waited four hours at the park entrance while several buses passed us without stopping, apparently full with pre-Christmas travelers. We finally hitched to a local town where all buses stop for meals and waited for one to come through with empty seats for us. Reaching town late we got to our hotel and gave our tired, aching bodies a rest before our morning pickup for the Kinabatagan River. 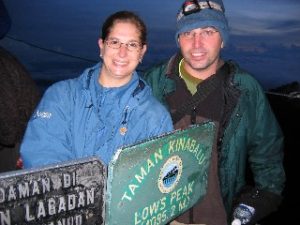 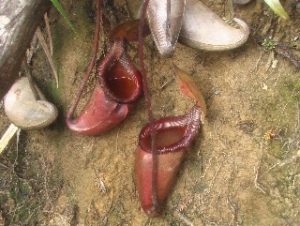 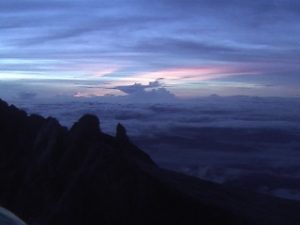