December 27th, Sukau, Malaysia – After climbing the mountain we needed some less physically intensive activity; luckily we were heading to the Kinabatagan river where we could spot wildlife (and possibly orangutan) from the seated comfort of boats. The river has a wide variety of Borneo wildlife which is relatively easy to see because the only forest left is a sliver between the river and palm oil plantations leaving little room for the animals to hide. At least that would be the case if it was not raining; while it had not rained for a week before our arrival, it barely stopped once we showed up. With only expensive lodges and some semi-expensive lodges as other option, we had chosen to stay with the Sukau homestay program, an effort conducted by the Kinabatagan Orangutan Conservation Program (run by a pair of French scientists) to engage the local community through tourism thus ensuring that conserving what is left of this ecosystem, one of the richest and most important on the island, is of import to them. The program currently consists of 12 local families who have rooms for visitors to stay in and agree to provide a certain level of basic comfort, allow the visitors to use their basic facilities and cook meals for the guests; they rotate stays to make sure that everyone has an economic stake in the program. Unfortunately they have had a hard time promoting the program and even the Sabah tourism office in Kota Kinabalu knows nothing about them, even when asked directly, despite their co-sponsorship of the program. It was difficult for me to get any information on the program, but after tracking it down I was able to make the appropriate arrangements. With the success of longhouse stays in Sarawak, the high popularity of this particular natural setting and the lack of affordable accommodations it is absurd that the tourism office does not suggest this option. We found it was not only the cheapest option and the most flexible (since you pay per boat trip you arrange your own program) but probably the most interesting.

The family we stayed with, though speaking virtually no English, were very accommodating and friendly, and even communicative. Though we had to contend with squat toilets and showers of river water from a bucket they were nice enough to provide us with a fan, free use of their washer and a pot of boiled water for hot showers. The meals were not as bad as I had feared, and some of the dishes would even qualify as tasty, they also provided bottled water for drinks and mosquito coils at night all at no extra charge. They also do not live in antiquated squalor; besides decent furnishings they have a toilet that flushes (when you pour the bucket of water down it), electricity for much of the day and a television with a vcd player and satellite (though it was not working). As it turned out, despite staying in an entirely Muslim village, this arrangement allowed us to celebrate a fairly traditional Christmas; us Jews had Chinese food (sweet and sour fish) and watched a movie (our bootlegged version of the good film Saved, which appropriately enough pokes fun at some of the more absurd degrees to which Christendom is taken).

As I mentioned, rain inhibited our wildlife viewing opportunities (luckily we did not pay for the boat trips we never took as would have happened at an expensive lodge). Despite this, in the first few days we saw four species of primate, including our first pig-tailed macaques, a monitor lizard and numerous bird species including 6 of hornbill, but no orangutan. On our last evening cruise our guide showed up late and we had lost too much daylight to really head up river where we had the best chances of seeing an orangutan, but at the dock one of the locals told him were a herd of elephants were and we went there. This gave us the opportunity to play with Borneo pygmy elephants, a distinct sub-species of Asian elephants which, as the name implies, are smaller than their mainland brethren who are in turn smaller than their African cousins. So, given their relatively small size, when I say play I mean we let one chase around a tree for some time while locals occasionally pulled its tail. During this episode Karen stayed on the boat, with our near-trampling by elephants in Africa three years ago still in her mind she was just too scared of these harmless creatures. While the elephants were a great sight, and the games wholesome fun, we still had not seen the orangutan we were looking for. Our final morning we woke up at 6:30 to decide whether to try another boat ride or sleep for an extra hour and take off for our uncertain trip to Lahud Datu a little earlier. The sky was overcast as usual and I could not tell whether it was going to rain or not, but after some hesitation we decided to go. We did not have a guide for this trip as he was busy, so it was just us and our boat driver (who also happened to be the father in our homestay family). We did the upriver trip, saw a few monkey and lots of bird and headed back towards the village. But on our way back the driver suddenly stops the boat points up and says ‘large male orangutan’ (the little English he knows are names of animals and ‘dinner’). Sure enough, in the tree on the river bank was a large, lazy orangutan for us to see; we stayed for 45 minutes watching it do very little other than scratch and sit there (all that was missing was the TV, no doubt we share over 95% of their DNA), but at least it didn’t run away. Having seen what we came for, despite so many people’s insistence that not to expect it, we were ready to try our several minibus connections to our next destination. 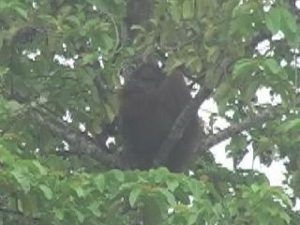 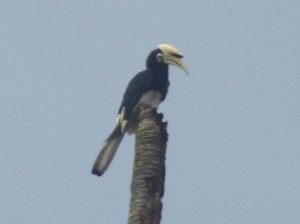 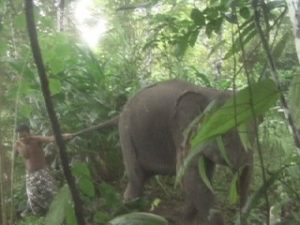