April 6th, Tissamaharama, Sri Lanka – Sri Lanka is a lovely country and the people are quite friendly and grateful for American aid following the tsunami (virtually everyone thanks us and mentions someone by name who came by their town or village to help), though often while sticking one hand down your pocket. One man, for example, apologized for blocking our way while saying prayers to the Temple of the Tooth across the lake. We started talking about why he was praying there and he told us he was a dancing teacher at a school for orphans (and told how an American doctor helped out after the tsunami). He went on to explain that it was a special day and there would be a special dance performance that night so we should follow him to obtain tickets for the event. Taking us to a batik shop that tourists don’t go to (if that were true why would it exist?) he showed us tickets for the daily dance performance. However, since he wasn’t asking for more than the face value of the ticket, and we planned on going to the show anyway, we did not feel too bad about his rouse. The show itself was a disappointment except for the crazy people who walk barefoot across burning coals.

Kandy is a pleasant town in a beautiful location around a small lake surrounded by hills. It is the second largest city in the country and its cultural heart; it was the last Sinhalese capital to be colonized when the British finally took control in the early 19th century. The Temple of the Tooth contains (supposedly) a tooth of Buddha’s that is much replicated, we had been to temples containing replicas all over Asia, and is the holiest Buddhist shrine in the country. Every day hundreds of people give donations to the tooth to the catchy beat of Sri Lankan drums. In a cave temple a little bit north of town we learnt, through detailed illustrations, the importance of good behavior (avoiding disembowelment seems reason enough).

From Kandy we headed further up into hill country to climb Adam’s Peak; depending on who you ask the footprint on top belongs to Adam, Buddha, St. Thomas or aliens. The trip should have been simple, two bus changes at a cost of about a dollar (public transport here is ridiculously cheap, a comfortable 2nd class train ticket for four hours cost us 75 cents each, that won’t even get you on the DC metro). Unfortunately one of the helpful locals (why do people have a hard time saying they do not know the answer) directed us on the wrong bus at the midpoint of our journey, taking us two hours in the wrong direction. We did finally make it to the base of the peak leaving us little time before our early morning ascent for sunrise had to begin. During pilgrimage season the trail is packed with pilgrims (it took some people 10 hours to make the 3 hour climb because it was so crowded on the weekend), but most of the pilgrims we saw were on the way down at 3 am. It seemed odd that they would not wait for sunrise but what can you do. Like so many of the great pilgrimage sites around the world this one was lined with people helpfully selling overly priced drinks and souvenirs (aimed at pilgrims), charmingly covered in litter and attractively filled with the aroma of human feces. As we went higher we figured out why the locals were on the way down; it was not just because they leave at midnight and are freezing cold trying to wait at the top for sunrise, but the clouds were settling in and the rain was coming. At the temple on the peak I dutifully rang the bell as the most recent donation was announced over the loudspeaker, but with no sunrise coming we headed down in the rain.

Our next little journey through hill country required a train trip and a prayer that we would catch the right bus connections. The train route is absolutely gorgeous and must be one of the best rail trips in the world. The hills are filled with tea plantations, fruit and vegetable gardens, secondary forests and small towns. The tea plantations have names such as Edinburgh Estate and Norwood estate and, when combined with the occasional stone church perched precariously on the hill side over a loch below, almost feels like the Scottish highlands. Dare I say it, even the weather was almost close to being pleasant. We did make it down to the lowlands and Tissamaharama, but only after hiring a tuk-tuk for the last leg of the journey rather than wait two hours for the next bus. This allowed us to arrive in town around seven in the evening, 17 hours after we woke up and 10 hours before we are to begin our wildlife viewing in Yala national park. 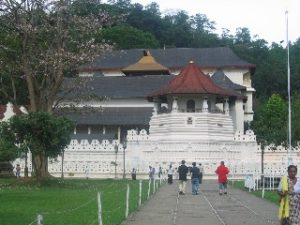 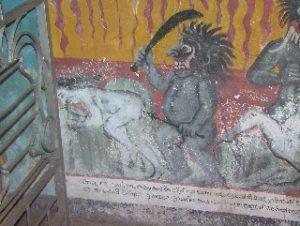 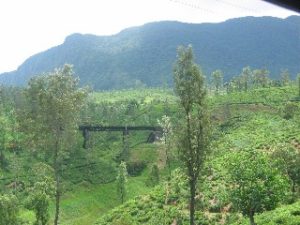