January 20th, Ban Kon Khuang, Thailand – Bangkok is a great city; the people are friendly, the girls always smiling, the atmosphere welcoming, the temples magnificent and the facilities excellent. While I did not find the backpacker ghetto on Khao San Rd. to be as good as say Katmandu or even Kuta (though it did allow us to get our fill of Israeli culture and food at Chabad), Bangkok has so many areas teeming with hotels, guesthouses and associated services, along with cheap and fairly extensive transportation around town, that we could choose to stay elsewhere. Maybe it was because we were removed from the Khao San scene, but I did not find the city to live up to its reputation for touts, scams and general nuisance. We had virtually no one hassle us, even at the train and bus stations, and those that did took no as an answer easily; compared to countries like India and Morocco, this place is very easy for the tourist. Over our five days we used buses, taxis, canal boats, river boats, sky trains and subways to extensively cover the areas of the city from the huge weekend market to all the temples to the Patpong entertainment district and almost everything in between; and not a single trip cost us more than ~$2.50. There is so much to see and do in Bangkok that it would be impossible to try it all, and not worth the effort, so we kept to the more impressive temples and sites, some out of the way places we stumbled upon and generally just wandering different parts of town. Even the most average wat (Buddhist monastery of which there are dozens all over the city) is an interesting, tranquil escape from the busy streets; watching the everyday practice of Thais as they try to increase their good merit as Buddhists is fascinating (my 1 baht attempt went awry when an automatic fortune generator responded with nothing but bad news and no lucks). Some of the more spectacular wats offer tremendous views across the city (Wat Saket), huge Buddhist statues (Wat Pho) and generally immense grandeur (Wat Phra Kaew). Although the dense traffic can complicate life for pedestrians, there are many great areas for wandering and we particularly enjoyed the authentic Chinatown area here more than in Singapore or Kuala Lumpur. We also had a great time wandering various markets from the completely tourist junk lining so many areas of town to the amulets and traditional medicine sold outside some temples to the car parts and food markets of Chinatown. Of course what really makes Bangkok so great is the opportunities available for unwinding after a hard day of sightseeing or shopping; what better way to bring the day to a close than a decent yet cheap meal (we particularly liked the food, ambiance and good use of profits of Cabbages & Condoms, and every meal comes with one of the joints namesakes), a relaxing $5 Thai massage and a nightcap at Supergirls. We thoroughly enjoyed Bangkok and are looking forward to passing back through at least once more on this trip.

We stopped for a couple of nights at the palm garden lodge near Prachin Buri so we could explore Khao Yai National Park, the oldest in Thailand. For some reason none of the guidebooks or tourist info mention the lodge near the southern entrance to the park; everything talks about all the places near Pak Chong in the north. This place though is cheaper, very friendly and tranquil and a convenient stopover on the way to the Cambodian border; the bus from Bangkok to Aranya Prathet stops 70 meters from the lodge, allowing you to leave here the same time as from Bangkok but arrive before all the Khao San tourist buses and Thai filled gambling buses. The park itself is fairly interesting, it contains several types of forest and grassland and while it does not compare to the best jungles in Borneo it has some great bamboo and vine-laden areas. Also here is the waterfall made famous by the Leonardo de Caprio flick The Beach, which I did not care for but it attracts visitors none the less. The major areas near the road, such as the waterfalls and visitors center, were a little crowded, but when we got onto the trails we were virtually the only people around. As for wildlife, besides the typical abundance of deer, several species of squirrel and monkeys, we saw many hornbill, several monitor lizards, an iguana, a group of white handed gibbons, a full-sized Asian elephant, a very large owl and a badger. I should also note how much more pleasant the weather is here, and in Bangkok for that matter, than it was in Borneo or the Peninsula. It is the cool dry season so Bangkok was not nearly as humid as Singapore and Kuala Lumpur, and the park did not drench us in sweat the way the parks of Borneo did. Of course it did rain while we were here, but, despite the worries of the staff, it did not lead to an abundance of our old friend the leech.

We are not done with Thailand, we will be back here a couple more times before we head home. For now, though, we leave tomorrow for the infamous Poipet border crossing on our way to Siem Reap and the temples of Angkor. 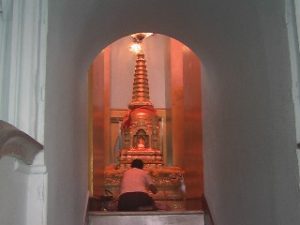 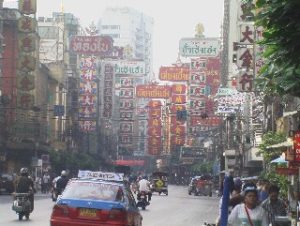 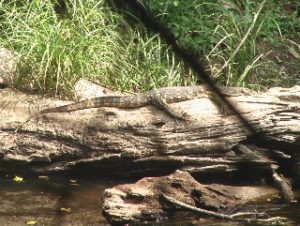