January 14th, Penang, Malaysia – Following up on my previous update, one of the other biases often demonstrated by travelers is assuming that experiences with poorer people are more authentic than with the upper classes. This leads people to dismiss encounters with locals on planes while praising them on a bus or train. Well, we decided it was important to understand the lifestyle of upper-middle class Malaysians as well, so that and free accommodations at a beach resort led us to Port Dixon. Taking up our old friend’s offer (click for link to reference), we were treated to a couple of nights in a deluxe king room at his resort. Taking my father’s advice to let the middle aged man inside me have fun too we even shared a very nice Cuban cigar we picked up in Singapore (take that U.S. Treasury department) on the balcony overlooking the pool This beach is about midway between Melaka and Kuala Lumpur and due to its closeness is very popular with locals who fill up the 16km of hotels every weekend. With our stay starting on Sunday night we had the whole place to ourselves; that was until Monday night when a conference for state employees began. The hotel was filled, the pool went from empty to active and the restaurant went from just the two of us to full enough for the weekend buffet to be served. For us, it was really just a couple of relaxing nights, free of charge; but the added benefit of the conference means we can justify the time not spent elsewhere.

Kuala Lumpur is like many other large cities in the world; it has its heritage represented through a dwindling number of colonial buildings and slowly gentrifying Chinatown and Little India areas with their temples and mosques while the modern city expands upwards with all the trademarks of a developed metropolis. The soul of the country (at least the peninsula) is the National Mosque, but the heart is definitely the Petronas Towers. Until recently the tallest building in the world, the towers represent all the glorious hopes of this nation as it heads towards ‘fully developed status’ (whatever that means) by 2008. Before taking the free ride to the bridge at the midway point between the towers you are treated to a film explaining the wonders of the building’s design and construction. The film is cleverly titles “Vision Realized”; both describing the completion of the towers and eluding to the rapid modernization of peninsular Malaysia. Of course with development comes a whole new set of headaches; on our final afternoon in the city, around noon when electricity use is at its highest, a faulty transmitter (they are still investigating but this is the initial explanation) caused a chain reaction that blacked out the entire capital area and neighboring states as far as the east coast and the Singapore border (sound familiar New Yorkers?). We were heading to an airline office to change some of our later tickets, but without computers that could not happen, so along with what seemed like the rest of the city we headed to the KLCC shopping center. The emergency generator kept a few escalators running, some lights on and a small amount of air conditioning blowing; just enough to help us kill the few hours it took to restore power to the city. Amazingly, there were no reports of any accidents or looting during the black out but several factories, whose lost production cost millions, are determining whether they have a legal case against the electric company; one quote in the paper said that the electric company is quick to cut off power when you are late on a bill, so what can a customer do when they are late on the power?

With gloomy skies overhead, and me a bit under the weather, we decided to skip our time in Penang and catch an earlier flight to Bangkok (someone has to explain to me how Air Asia can stay in business with the low fares it charges, no airline ticket should ever be under $7). We are leaving Malaysia and the island/peninsula area of Southeast Asia, for the final time on our journey and the leaving the Muslim world for a while. We thoroughly enjoyed Malaysia, particularly Borneo, but I am looking forward to the Buddhist dominated cultures we are heading to. 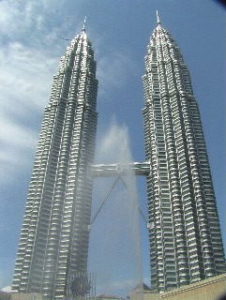 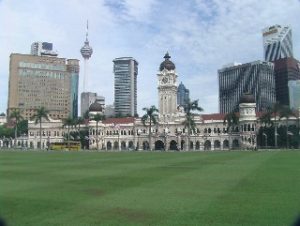 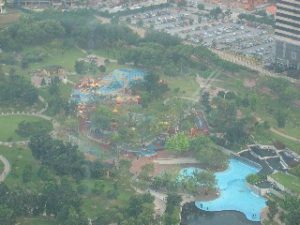