January 25th, Phnom Penh, Cambodia – The border crossing into Cambodia at Poipet is one of the more infamous in Southeast Asia. It is well known both for the many scams perpetrated against foreigners crossing here and the legions of Thais who cross to indulge in the many casinos and teenage hookers available over the border. With all the reports we had read on the crossing, we were prepared for the worst; but in the end it was a fairly smooth trip that saw us get to Siem Reap in good time with no unofficial expenditures. The biggest difficulty came in catching a bus to the Thai border, we had to take a bus to a midway point and switch because none of the buses through to the border would stop for us. The fare collector (all buses have a driver and someone responsible for collecting fares) on the first bus demonstrated for us once again how nice and helpful the Thai people are as he ran from our bus to the one heading for the border to hold it while we got our luggage. At the border a few people came up to us to carry our bags, but no hordes and they backed off when we politely declined. The wait for the Cambodian visa and arrival hall was a bit long, but since we got to the border before the scammy tourist buses (these are the buses that charge nothing for you to ride them then overcharge you for visas, convince you that it is required to change money at the border, drop you a few times along the way at restaurants that pay high commission and finally bring you in much later than advertised to the guesthouse of their choice), not terrible. Once we left the arrival hall this was where the real touts were supposed to come out of the woodwork; the people trying to get you on the tourist bus for the trip to Siem Reap or the taxi mafia trying to get you in one at a ridiculously high price. I made it through immigration before Karen and there was some delay as they decided whether to let her in to the country. While I was waiting, someone did ask if I wanted to take the ‘cheap’ bus, but as I ignored him he dropped it and asked about a Camry (since virtually every car here is a Camry the word is synonymous with taxi). I knew what the proper fare was and quickly dismissed his first offer until we finally agreed on the correct price for a car. At this point two South Koreans asked me if I was going to Siem Reap and wanted to share a taxi; since this would cut the price in half I agreed. However, the taxi driver wanted more money to take four people; my favorite bargaining technique of his was when he pointed out how uncomfortable it would be because one of the South Koreans was “very large”. In the end, he told me that the police do not like when taxis take more than 3 tourists and they charge more for ‘parking’ when they do, I offered another 100 baht for this trouble and we went off. He did in fact have to tell the police how many people and how much we were paying and then he had to go to a side street to pay the proper ‘parking’ fee; the mafia and police still tightly control business around here. In Cambodia we are finally driving on the right, that is to say correct, side of the road, but many of the cars still have the steering wheel on the wrong side. As the driver explained to me, the government charges too much for cars so people have to buy them in Thailand and not tell the government; this also explains why they lack license plates and cannot be driven out of the region where the police are being bribed.

All I have heard suggests that Angkor is the one ‘must see’ in the region, and it appears like everyone else heard the same thing. The town of Siem Reap has developed to serve the tourist trade, this is clear, and it seems as though everyone in town is dependent on tourism for their revenue. Luckily, there are more than enough tourists to support this, though the number of moto drivers is greater than the number of daily visitors; our driver said he finds work maybe a week out of the month. I was amazed by the number of people buying one day tickets; you can rush through the major temples in a day but you will miss some spectacular side sites and will definitely not have the time to relax in the tranquil atmosphere of some of the ruins. On the other hand, how you can spend seven days wandering around the ruins without going nuts is also a bit beyond me; the three day ticket is a great compromise. Once we got beyond the major sunset destination, we were able to wander most temples in peace and the entire landscape was very relaxing. Angkor Wat itself definitely deserves its reputation, the temple is amazing and some of the carving is stunning. The other big temples that everyone sees when they come are also great, but our favorites where the large, peaceful, forest engulfed Preah Khan, the unique island temple Neak Pean and the wonderfully preserved, spectacularly decorate Banteay Srei. The temples may be the draw, but what makes this site so interesting is the people around; the masses of tourists, the moto drivers waiting for their customers outside each temple, the rows of stands selling exactly the same souvenirs, the land mine victims who play music on the paths, but mostly the little children using their cuteness to push cheap wares and food. One little girl impressed us with her knowledge of world capitals and population numbers, she asked for an American coin so Karen gave her a dime. In return she gave us little pictures she had drawn (the one she gave me was much nicer than the one she gave Karen). All seemed well until on our way out she was lying in another girl’s lap, this other girl was upset and yelled at us that we gave a small coin to her; I don’t know if she was disappointed in what we gave or if the older girl was in fact running the little child mafia and had scolded the younger girl for coming back with so little. In any case, they are still cute. There is one site in Siem Reap itself worth mentioning, and taking time away from the temples for; the landmine museum consists mostly of mines and unexploded ordinances unearthed by the museum founder. Donations go to help rehabilitate those who have been injured by the mines and fund the mines removal, and the museum also serves as a center where many victims live and work.

Phnom Penh is very much as I expected it to be. This city was once considered the jewel of the French orient but the long years of civil war took its toll. Once the UN and NGOs started coming in with money the city rebuilt quickly around their needs. There are many nice villas scattered around the city, plenty of guesthouses and hotels catering to the visitors needs and many restaurants serving exactly what journalists, UN employees and career do-gooders want; pizza with various drugs baked in. Riding around town on the back of a motorcycle haws been fairly pleasant, even if the two of us were a little crowded on the back. The most popular tourist sites are also the most depressing we have been to. Both the killing fields (largest mass grave and extermination camp found from Pol Pot’s regime) and Tuol Sleng (also known as S21, the principle prison in the capital used by the Khmer Rouge) are most striking in their current peacefulness. The killing fields is a quite grassy area with many dips and rises that look like rolling hills, of course they are really the unearthed grave. The site is out in a rural area about 15 kilometers from the city and the only sounds you hear are the children in the school next door. You can see the locals working in the rice paddies around the area and if it weren’t for the stupa in the center filled with many skulls found in the graves, you would have no reason to suspect this was used as it was. The school-turned-prison at Tuol Sleng is in the outer area of the city, but is off the main road and is very quiet and peaceful. The old school grounds have large grassy areas that are pleasant to walk around, but the hundreds of photos of prisoners in the buildings as well as the photos of the 14 dead as they were found when the Vietnamese took over the city drive home what was done here (only 7 people were found alive when the Vietnamese entered the prison). This is a country coming to grips with a national trauma and it is amazing to watch their lives developing in the context of this recent past. One great opportunity in a place like this is the ability to give something back to those who need it. With that in mind we made sure to get our massage from the blind with the proceeds going to the disabled and eat dinner at a real good tapas bar, Friends, where the profits go to help local children’s clubs whose members also act as the waiters and cooks; giving actually can feel good. 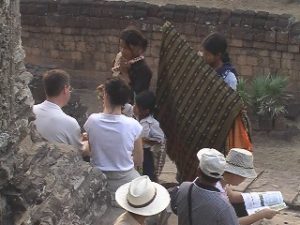 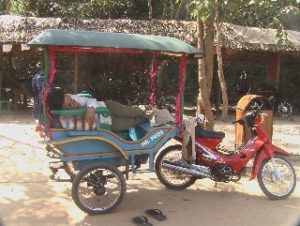 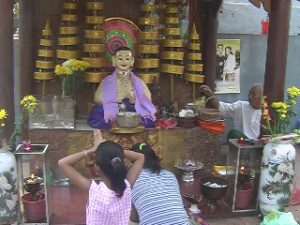