November 7th, Christchurch, New Zealand – Our last week in New Zealand has come and gone with more amazing vistas, exciting adventures and memorable experiences; as well as the side show of a depressing election result (a topic of discussion with almost anyone who learns we are American). We started the week with a side trip to Mt. Aspiring national park; driving towards the trail head intending to spend a few hours walking in the West Matukituki valley towards the glacier. Some unknown distance from the trailhead we encountered a stream that we would have to ford with a sign recommending 4×4 vehicles only; while fairly certain we could make it, in a rental car untold miles from the nearest tow truck we decided not to take the chance and got out to walk. Luckily, it was only 15 minutes before a Canadian couple came driving by and stopped to give us a lift up the road. A few minutes later we came to another ford; realizing we would have to walk back as far as we had driven, and seeing a swing bridge across the river leading to trails on the other side, we thanked them and headed across the bridge. One of the great things about walking in an open valley between a river and a mountain, with few trees but hundreds of grazing cows is that you do not really need a trail since you cannot possibly get lost. We saw a waterfall across the valley and headed in its direction; it made for a nice little walk and was a beautiful spot for a stop. The return journey took a little while before a local who likes to spend weekends camping in the park came down the road and drove us the last few kilometers to our car.

Continuing south towards our destination at Te Anau, we intended to stop at a vineyard in the Queenstown area for some refreshing free wine. Before reaching the intended vineyard we saw a sign for one that also had a cheesery, and we are not the types to pass up a chance at free cheese. This served as omen of things to come; we stumbled across a couple of other great cheeseries across the rest of the week and were suitably impressed by all the varieties of brie, blue, farmhouse and feta we tried. The lake towns and fjords of the south coast were all amazing, and a cruise on Milford sound was a great outing. But one of the best experiences in this region was seeing a rare Takahe (a bird) held in Te Anau; this species was thought to be extinct until some were spotted in the area in 1948. They have now moved populations to predator free islands to revive their numbers (I will come back to conservation in a moment). About an hour south of Te Anau near the town of Clifden is a series of limestone caves that are open for exploration; we crawled and spelunked our way through the caves until we came to the ‘swimming pool’ which was too deep to be crossed dry with no visible way around. I highly recommend a stop here if in the neighborhood, it is quite fun and different from the other tourist sites around the country; and if anyone figures a way around the pool let me know. Stopping in Invercargill to visit 124 year old Henry, the tuatara (a lizard-like relic of the dinosaur era), we walked passed our first Kiwi Prius; the steering wheel was on the wrong side and it didn’t have all the features, but it made us miss our car anyway (To parents: how’s it doing?).

One of the most intrepid groups of travelers out there are the Japanese; they take their bus tours everywhere. In Oamaru I finally realized how they cover so much ground. Every night in this town, some time after sunset, dozens of blue penguins (the smallest species of penguin) come ashore together and waddle back to their nests after a long day feeding at sea. The town has set up a viewing area for this event that holds up to 300 people; they give an approximate time of when to show up, but as with any wild animal they could not possibly predict the exact moment they will come. The night we were there, sharing the viewing area with a Japanese bus group, the penguins came considerably later that expected. After about a half hour of waiting, just as the first penguins were coming ashore, the tour leader motioned to all the stunned tourists that it was time to go; as if they were in a hurry to get somewhere at 9pm. The entire group left, clearly disappointed; and for good reason, they missed quite a show. About 70 penguins came ashore that night, a few walked within a couple feet of the grandstand and one let me get right up next to it as it took an evening stroll in the parking lot. Why bother to go somewhere if you won’t wait the extra few minutes to actually see what you came for?

Mt. Cook was our next stop; it is the highest mountain in Australasia and another spectacular site. Staying in a cabin at the campground, using the toilet and shower blocks, I was reminded of all the various campgrounds my family stayed at on our summer vacations. I want to take this moment to thank my parents for teaching me at a young age that you can have a good time cheaply without luxury. I suspect at some point they will want to apologize to Karen for the same lesson. The area here is also stunning and we walked to some great views of the surrounding peaks, glaciers and glacial lakes. We followed that up with a half day of rock climbing up the sheer cliffs around the Cook range; it was a nice challenge for our final New Zealand adventure.

We are now spending a relaxed day back in Christchurch; running some errands, making some advanced reservations, taking care of email etc. New Zealand has been a fantastic experience, and worth some more of our time in the future (I have a feeling we’ll be saying that quite a bit). From the alpine peaks to the west coast rainforest to the sheep-filled farmland of the east to the rugged coastlines; the countryside has been beautiful and the people extremely friendly. Tomorrow morning we head off to Tasmania for kangaroos, devils and more great wilderness. 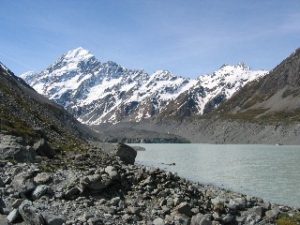 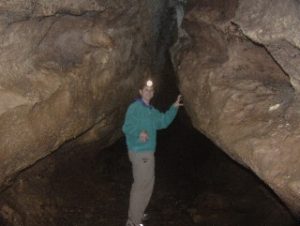 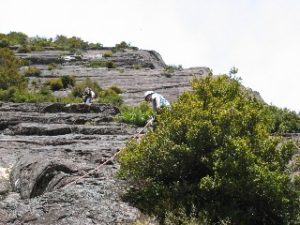