November 12th, Derwent Bridge, Tasmania – Whenever you switch countries there are certain adjustments you need to acclimate to. Such as: currency changes from the New Zealand Dollar worth .70 U.S. Dollars to the Australian Dollar worth .75 U.S. Dollars, linguistic changes from Kiwi accented English speakers greeting you with ‘cheers’ to Aussie accented English speakers greeting you with ‘g’day’, radio station changes from New Zealand’s preference for good music even when only one station is available to Tasmanian’s preference for talk radio even when a dozen stations are available, but the change that proved a difficult adjustment was the inexplicable switch of the controls for turn signals/lights and windshield wipers. I am still turning on my windshield wipers every time I turn right; but at least I am turning into the correct lane.

After a quick trip through Launceston and stops at a handful of the tasty and free wineries of the Tamar Valley and Pipers River regions we arrived in Gladstone; our home for a couple of nights. This old mining town with a population somewhere around 100 is what one might call quaint. It is the kind of town where the general store/gas station/post office closes at 6 and the local pub serves as the town’s restaurant, hotel and over the counter horse racing betting station. It was a decent place to stay and served as a great base for our foray into Mt. William national park; this park has been established as a reserve for the Forrester Kangaroo, and they are in abundance along with plenty of other wildlife. We saw most of the creatures we had wanted to see in Tasmania including Wombats, Echidnas, Possums, Wallabies and Kangaroos. For some reason the wallabies, which are essentially smaller version of kangaroos, were very sociable and as soon as we took out our lunch we were surrounded by mothers with joeys in their pouches; whereas the considerably bigger kangaroos were skittish and would not let us get too close.

Our next major excursion was to go platypus spotting in the Warrawee Forest Reserve near Latrobe; but the drive there encouraged some side excursions through the scenic mountain plateaus across northern Tasmania. These side tracks turned into true adventures when the wet dirt road combined with some engineers’ idea of a joke; the Tassies take a lot of pride in having the windiest roads in the world, and those hairpin turns up to Mt. Barrow or Ben Lommond live up to the billing. The platypus spotting was a great excursion; we saw several of these strange creatures in the river while being led by one of three brothers in their 60’s who, along with their wives, have obtained state forest designation for the park and created and maintain several boardwalks, tracks and a viewing hide. They fund the maintenance through their on-demand tours, and they need the money as local teenagers seem to like repeatedly vandalizing the hide. The platypus and the echidna represent the only living example of monotremes; mammals that lay eggs and nurse their young. The echidna is similar in design to a porcupine and, like a hedgehog, rolls up into a ball with its quills pointing out whenever threatened. So when I am slamming on my brakes because I see one crossing the road it decides to roll up into a ball instead of scurrying to the other side. Luckily, I stopped just before hitting it, and Karen was able to slowly chase it to safety on the side of the road.

The major mark of our time in the west and the Cradle Mountain-Lake St. Claire World Heritage Area was rain; we were able to get some decent, though sometimes soaked, hikes in at both the Cradle Mt. and Lake St. Claire ends of the overland track; though anyone taking on the trek this time of year would be drenched. Having not seen Tasmanian devils in the wild, we decided to stop at the Trowunna wildlife park. This education/rehabilitation center specializes in devils and has a good display of them including feedings; they also have a range of wild animals on their grounds including kangaroos, wallabies and rare birds. They take in orphaned and abandoned young animals for rehabilitation and release back into the wild, and this meant Karen could hold an orphaned wombat; which was almost as much fun as she had petting the wild wallabies and echidnas we came across around the island. 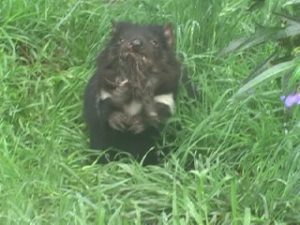 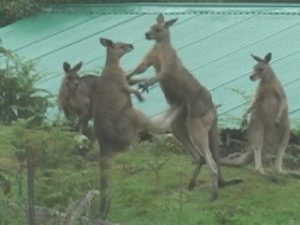 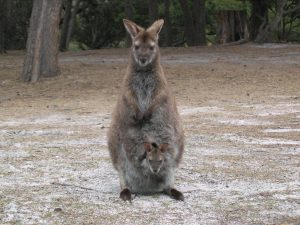