February 13th, Hanoi, Vietnam – For the Vietnamese, Tet is a very expensive time of year; they have to purchase decorations which include flowers, apricot trees, peach blossoms and kumquat trees that cost quite a bit, they have to prepare large feasts for several days of family banquets with nonstop eating and drinking (we sat next to one of those feasts on the bus as a lady transported it from Hoi An to Danang), and they need to buy offerings, ghost money and gift baskets to ensure they merit a lucky year. These added expenses can make some act a little crazy in the days leading up to the holiday. One of the expats in Nha Trang who is married to a Vietnamese woman mentioned how this time of year the police drop by to inspect the legality of their union and find any other objectionable activities that may merit a bribe. At the post office in Hoi An we saw a woman throwing a fit; she was screaming and jumping around, smacking the glass divider between her and the employees, it was quite a scene that was going on for about 20 minutes before we got there, continued for the 30 minutes we were there and was still going strong. As it was explained to us, she was having money wired to her and it had not yet gone through, it was being processed and would be ready but she just could not stand the prospect of waiting. It is possible that this seasonal insanity is what led the people at the Danang bus station to act like such pricks, but more likely it is just their attitude towards tourists and the belief that they are entitled to treat us like trash.

We just wanted to take a bus from Danang to Hue, the tickets listed the price on them as did the window at the ticket counter; it was 30,000 dong. The first minibus we approached asked for 50,000 and I went to the ticket counter to purchase a ticket at the proper price. I do not mind when places charge foreigners more, I think that is a reasonable policy, but when that is not the stated policy and they treat foreigners as less deserving of the respect they would provide a local customer I get annoyed. At the ticket counter I was about to complete the purchase when the driver of the minibus ran up and in Vietnamese instructed them not to sell me the ticket for less than 50,000. When I asked why she replied because our bags were large, when I asked if the local next to me was paying extra for her many boxes the reply was no, when I asked why the reply was, ‘no speak English’. It is very frustrating when you cannot complete a simple transaction because the other party refuses to deal honestly, but in my time in Vietnam this is what I have come to expect. The next minibus driver insisted on 100,000 for one person, she screamed the number at me repeatedly and would not even enter into negotiations; as I was getting more frustrated, the bus pulled out with the entire back row empty. Rather than pick up an additional paying fare at a reasonable price, they chose to leave out of spite; nothing at all like the face conscious culture that they claim to be. Finally I took a page from their book and started acting like the woman in the post office; sadly enough this worked and they finally sold me two tickets at the right price plus a 10,000 dong bribe for the driver. There have been three countries we have traveled to that have left a bitter taste in our mouth because of the attitude and actions of the people; Vietnam, Morocco and France. The only shared characteristic we can think of is the heavy French influence, is this just a coincidence? It is worth mentioning that we had a conversation on the Vietnamese attitude with two French travelers in Dong Ha (waiting for an overnight bus after a worthless tour of the DMZ) who, without any prompting from me, made the same French connection.

After another overnight bus (the last and worst one yet), we arrived in Ninh Binh once again frustrated with Vietnam and looking for ways to shorten our time here. We were able to move up our sojourn into Cuq Phoung national park and set off in the afternoon with a couple of bicycles to travel the countryside with a destination of Tam Coc. Though we got a bit lost riding through the rice paddies, it was one of the more relaxing excursions in Vietnam and we did eventually reach the river where we took a boat ride through several caves admiring the rocks jutting from the paddies. The boat rides exist partially to show tourists the picturesque landscape and partially (or primarily) to try very hard to sell you their local embroidery work. Unfortunately for our boat rower, we have no problem saying no, no matter how many times you ask and how many designs you pull out of your box.

The next morning we were supposed to head out for a couple of days in the park when we were informed that all the guides were gone for the holiday. This did not bother us, we prefer not having a guide anyway, and we worked with the place to arrange for a car and driver to take us there and pick us up the next day and for reservations at accommodations in the park. The main reason we were going to this park was to check out the primate rehabilitation center; the center houses most native Vietnamese species of Langur and Gibbon, many of which are highly endangered in their natural habitats. The center had a good track record at rescuing the creatures from cages, hunting injuries and pet markets. One day they hope to release the monkeys back into the wild, but for the time being this country is completely unable to care for its wildlife and the center views it as to risky. Instead, the center keeps them in small enclosures or releases them to one of the two small open areas in the park that are protected by electric fences. It is because the people of this country will eat anything, and the government has no ability to prevent poaching, that we found no trace of mammalian life outside of the rescue center save for homo sapiens. Humans there were plenty of; hordes of local kids, out of school for Tet, spent the daylight hours in the park on the trails, smoking, littering and making out. I suppose it is good that the locals appreciate their natural surroundings, but it would probably be better if they did so without feeling the need to ride their motorbikes on the hiking trails (then again it would be nice if Americans could appreciate Yellowstone without snowmobiles), but with these people we will take one step at a time. Though we were the only two people spending the night as guests in the park we had lots of company for dinner as we were invited to the staff holiday banquet. There was plenty, if not terribly appealing, food and the alcohol never stopped flowing; beer, rice wine and locally made whiskey, as soon as you emptied the glass there was someone to fill it for another toast. The next morning, having walked all the trails and tired of the place, we got motorbikes to take us to the nearest phone at the park entrance and we had the car come and pick us up early. We were able to make it to Hanoi that evening and changed our tickets to fly out of Vietnam a few days earlier than planned.

Hanoi is a pleasant city, though the streets are currently much quieter than normal due to the holiday and most of the shops are closed; with a little more opening every day. Though the streets are quiet, there are crowds to be found; we wandered into the Temple of Literature only to come across a game of Chinese chess using human pieces and masses of kids and families in a carnival-like atmosphere, we stumbled across a group of dozens of woman chanting hymns of some sort in another Buddhist shrine, and the Mausoleum of Ho Chi Minh was packed with tourists and locals waiting for a momentary glimpse of the embalmed leader (definitely one of the more interesting sights in the country). We have even managed to find decent food in this city, something that had disappointed us throughout Vietnam as the cuisine has not lived up to its reputation. A manager of several restaurants catering mostly to expats explained that in Vietnam the food is fairly bland and tasteless compared to Vietnamese cuisine served in the U.S., Europe or elsewhere (one couple we met said the best Vietnamese food of their trip was in Singapore). Also, for the first time since Tasmania, we have near winter like weather with temperatures in the 60’s (17 Celsius) and a cold drizzle (may not be snow and ice but it’s the closest we are going to get). Though that may sound unpleasant, after months in tropical heat it is somewhat of a relief. While Hanoi has improved our impression of this country, we are happy to be moving on and will be flying to Hong Kong for a few days tomorrow before returning to Bangkok and heading up into Laos. 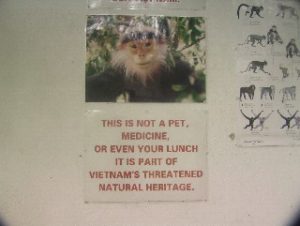 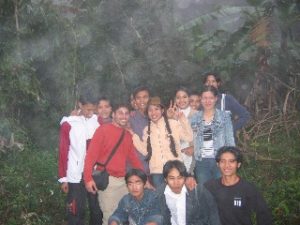 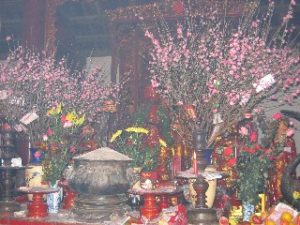