February 6th, Hoi An, Vietnam – We have been fairly lucky with out itinerary in that we have not had many long distances to travel; particularly we have had only one overnight journey since flying from Los Angeles to Tahiti. However, the long North-South nature of Vietnam has not been as kind and we have three long journeys in the country (if we had taken the fastest direct HCMC-Hanoi train it would take 29 hours). Another complication has been Tet; this time of year all Vietnamese are heading home for the holidays and the dominant route is from HCMC north, filling all the trains, planes and buses. Our first of those legs was HCMC to Nha Trang. We were lucky enough to get two seats in a sleeper compartment on a crowded train; it was not the best timed train but was certainly more comfortable than a bus. We shared the compartment with two university students returning home, they spoke a little English and provided some interesting conversation before we drifted off to sleep.

We could pretend that we came here to see the sights and observe Vietnamese culture, and we did watch a wedding processional unload from a boat in the harbor and passed by interesting floating fishing villages every day, but the reason we came here was to dive. Each morning we went out for two dives with plenty of time to laze around the boat in between and spent the afternoons lazing around town or our hotel. We used the opportunity to complete our advanced open water certification, providing the excuse for some interesting dives we otherwise would not have done, such as a night dive. Completing the course also takes us one step closer to dive master certification, and possession of a marketable skill which will allow us to survive as bums in beach locations worldwide. There were several people temporarily working with Rainbow Divers (the excellent outfit we went with) as they complete dive master or instructor courses; it does not appear to be too stressful a life.

The second of our overnight legs was from Nha Trang to Hoi An. Unfortunately, we were unable to get train tickets for this trip; in HCMC they would not let us buy tickets that left from Nha Trang and by the time we got to the beach the trains were sold out. This left us with the tourist bus as the only alternative; buses are less comfortable to begin with, and this one was completely full. Not far out of town on the highway we came to a disabled truck that he bus was unable to move around; for some reason the company thought the best course of action was for all of us to get off the bus and walk back down the unlit highway as the bus backed its way downhill. Once we got going again we were able to get some sleep, but every time the bus stopped for food and bathroom (why it stopped so much in the middle of the night I have no idea) the bus became noisy, and always with the sound of the same Vietnamese voice, making sleep more difficult. When we finally got to Hoi An the first stop was at a guesthouse a bit out of town, which they insisted was a very good price and it would be hard to find rooms in town. When I explained I had reservations somewhere else they asked me to break them; the commission-based tourist buses are quite annoying.

Hoi An has a reputation as a charming small town, and while I can see how it was once a quaint cultural enclave, today it is completely given over to tourism. With the restrictions on development that come with its World Heritage status, you cannot blame the townsfolk for capitalizing on every ounce of tourist money they can find, but it does take away from the charm. We have found the sales tactics, moto and cyclo drivers and street folk in Vietnam in general, and Hoi An in particular, to be the most aggressive we have come across during our travels. In other countries we were Sir or Madam, here it is ‘you, buy this.’ In other countries no usually ends the conversation, here it is just the beginning. I have no trouble walking away and being a bit aggressive when necessary or saying no to even the cutest little kid pushing Tiger Balm (and I had some fun with a few of the kids, once they understood they were not getting any money they became children again), but it does ruin the atmosphere of the town. The old town is still nice enough and wandering around some of the more residential areas reveals the nice, charming city that attracted all the tourists in the first place. This was particularly true today as many of the shops were closed or closing for the upcoming holiday. One house in particular, among a row of colonial French building, proved an interesting experience. The fourth-generation owner, Mr. Duong, is more than happy to show individuals, though not groups whom he find to noisy and unwilling to carry on conversations, around the well preserved structure. The furniture is mostly over a century old and he sounds very proud as he talks about his family’s history there; particularly when he showed us his father’s altar and recounted his funeral. Hoi An is also well know for its tailor shops and we both had a couple of new suits made up for fairly cheap prices; providing new wardrobes for the inevitable return to the working world.

Now we are heading up to Hue for Tet and from there will continue north to national parks around Ninh Binh and Hanoi. Hopefully we will be able to get train tickets when we get to Hue, but we are not too hopeful; looks like there may be one more long bus ride in our near future. 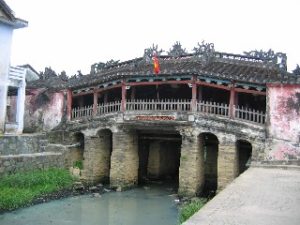 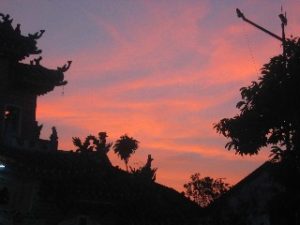 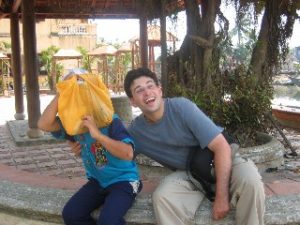